Whitworth Hall Hotel is a prominent venue for weddings and functions in County Durham.  It is situated near Spennymoor and resides within Whitworth Hall Country Park.  Flashdance Disco has provided the entertainment for many weddings and parties at this venue over the years.

Our team was there for the wedding reception disco for Jane and Paul (pictured) and the happy couple selected ‘Just The Way You Are’ by Bruno Mars as their first dance song.  Following that memorable piece of music, the newlyweds wanted a classic song from The Hollies called ‘He Ain’t Heavy, He’s My Brother’.

The couple told us that they wanted a good selection of music that would cater for all the different ages of the guests attending the party and that’s exactly what we set about doing for the night.  In fact, if you view the accompanying video (below), you’ll see that the wedding guests really let their hair down and took part in some really memorable dances and shenanigans.  These included a special version of the Haka (the original being a traditional Maori war dance), some break-dancing, a ‘thrilling’ replica of a famous Michael Jackson dance/music video and to top it off a good old tune from Fank Sinatra.

Radisson Blu Hotel In Durham: Mobile Disco & Mood Lighting Provided By Flashdance Disco for the party that was organised by Louise Medus-Mansell.

The Radisson Blu Hotel in Durham City was given a splash of colour courtesy of our Mood Lighting service and to add to the great atmosphere, the Flashdance Mobile Disco service provided the great party atmosphere.

This was the first time the Flashdance Disco team had been to the Radisson Blu hotel that sits on the bank of the River Wear in one of the finest locations in the North East of England.  We were hired by Louise Medus-Mansell who was one of the last babies to be born with the effects of the drug thalidomide.

On the last day of a two-day event in the North East, Louise organised the party for fellow supporters and those affected by thalidomide.  She hired Flashdance Disco and not only did we entertain the guests, but we also installed our Mood Lighting service and lit the function room up in their chosen colour of purple.  The two services worked hand in hand and we thoroughly enjoyed performing and being a part of the party.

Our instructions included playing a wide selection of music and we did that for the various people and age groups in attendance.  To keep the attendees amused, there were also casino tables, but we were on hand to get the party in full swing.

If you would like to know more about Louise who hired Flashdance Disco for her special event, please head over to The Guardian website for this insight into the lady: My thalidomide family: Every time I went home I was a stranger

Louise is also the author of a book called ‘No Hand To Hold & No Legs To Dance On’ and is published by Accent Press.

The newlyweds selected the latest release from Kodaline as their first dance and they took to the floor as husband and wife to ‘The One’.  As far as other music selections were concerned, our brief was to play a wide selection of music to cater for all the different age groups attending the party in the clubhouse at Bishop Auckland Golf Club in the North East of England.

Flashdance Disco has provided our services at Bishop Auckland Golf Club many times over the years for private parties and celebrations (weddings, anniversaries, engagements, etc.,) and we’ve also been hired by the venue for some of their events for the members of the North East Golf Club.

Bishop Auckland Golf Club was chosen by Melanie & Michael to host their wedding reception party and Flashdance Disco was on hand to provide our professional mobile DJ service to the happy couple.

The newlyweds were married in a wedding chapel in Las Vegas and the bride was serenaded and escorted down the aisle by Elvis (not the real one, we suspect) to meet her husband to be.  As you’ll see from the video, the couple also participated in an interactive style, to ‘I Can’t Help Falling In Love With You’ and ‘Love Me Tender’.  They finished the wedding ceremony with ‘Viva Las Vegas.’

To mark their marriage, Melanie & Michael held a party for their friends and family at Bishop Auckland Golf Club in County Durham and to give the guests a feel for the wedding that took place in in America, they also hired our Video Projection Service to put on-screen pictures of their big day.

The Video Projection Service was a nice touch as it allowed those who did not see or hear about the ceremony in Las Vegas to get a feel for the memorable event.

Back in the UK and at Bishop Auckland Golf Club, the only formality left for the couple was to take part in their first dance as husband and wife.  They selected Al Green’s ‘Let’s Stay Together’ as their special song.

We’ve lost count of the number of weddings and other parties that we’ve successfully completed at Bishop Auckland Town Hall in the North East of England over the years.  On this occasion, we were booked by Gayle & Craig (pictured right) to provide the music for their wedding reception.

The newlyweds selected two songs that were special to them to kick the party off.  They had John Legend’s “All of Me” as their first dance and then Gayle took to the dance floor with her father for them to have a special moment together with Heartland’s “I Loved Her First” to dance to (video below).

Flashdance Disco was asked to make sure that there was a wide range of music to cater for the different ages of the guests and the different tastes in music that we all have.  We always enjoy providing our Mobile DJ service at Bishop Auckland Town Hall and with the revamp and new tourist attractions that are set to come to the town, we think that the venue will prove to be incredibly popular for hosting parties, corporate events and wedding receptions.  The Eden Room and the Laurel Bar are an excellent choice for holding a party. 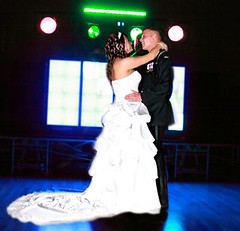