Darlington Rugby Football Club (Blackwell Meadows) celebrated its 150th Anniversary with a grand ball at the venue in May 2014.  The club was founded in 1863 and a Celebration Ball was organised to mark the special occasion.

The club organised a ‘Black Tie’ event with a marquee erected on the pitch next to the clubhouse.  Flashdance Disco was on-hand to provide part of the entertainment, alongside an eight piece soul band called The Smokin’ Spitfires on Saturday 17th May 2014.

Not only was the event put on to celebrate 150 years of Darlington Rugby Football Club, but all proceeds from the raffle went to their chosen charity – St Teresa’s Hospice.

The organiser of the ball, Lynne Murphy, praised the efforts of the Flashdance Disco team and we are always on-hand to assist with any other event that she plays a part in. 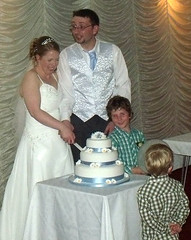