Radisson Blu Hotel In Durham: Mobile Disco & Mood Lighting Provided By Flashdance Disco for the party that was organised by Louise Medus-Mansell.

The Radisson Blu Hotel in Durham City was given a splash of colour courtesy of our Mood Lighting service and to add to the great atmosphere, the Flashdance Mobile Disco service provided the great party atmosphere.

This was the first time the Flashdance Disco team had been to the Radisson Blu hotel that sits on the bank of the River Wear in one of the finest locations in the North East of England.  We were hired by Louise Medus-Mansell who was one of the last babies to be born with the effects of the drug thalidomide.

On the last day of a two-day event in the North East, Louise organised the party for fellow supporters and those affected by thalidomide.  She hired Flashdance Disco and not only did we entertain the guests, but we also installed our Mood Lighting service and lit the function room up in their chosen colour of purple.  The two services worked hand in hand and we thoroughly enjoyed performing and being a part of the party.

Our instructions included playing a wide selection of music and we did that for the various people and age groups in attendance.  To keep the attendees amused, there were also casino tables, but we were on hand to get the party in full swing.

If you would like to know more about Louise who hired Flashdance Disco for her special event, please head over to The Guardian website for this insight into the lady: My thalidomide family: Every time I went home I was a stranger

Louise is also the author of a book called ‘No Hand To Hold & No Legs To Dance On’ and is published by Accent Press.

We recently renewed our Wedding Vows at The Honest Lawyer Hotel in Croxdale.  We had seen Flashdance Disco previously and were fortunate enough to book Michael and Flashdance Disco’s for our evening event.

We would like to thank Flashdance Disco for helping make our day so special – excellent selection of music, light show, kept the dance floor full and the guests happy.

Definitely recommend Flashdance Disco and will be using them again soon.

Flashdance Disco was hired for the joint 40th Birthday party and 10th Wedding Anniversary celebrations for Moral & Jeremy at the Garden House Hotel in Durham.

Thanks for Saturday night – it was a great night!

Thanks to Flashdance Disco for making my 40th birthday celebrations and 10th Wedding Anniversary go with a bang! The music was excellent and you judged the crowd and our musical preferences perfectly. We certainly made The Garden House Hotel in Durham rock and their windows steam up. Thanks for helping to make it such a great night.

Thanks for all your help Flashdance! 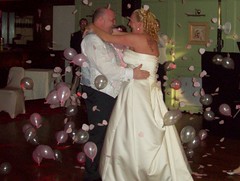